My friend Helene is such a multi-talented artist that she just knocks me off my chair. She started sculpting a few years ago and people are falling in love with her work. Can you blame them? The beautiful piece above is called "Daydream." To see more, click here: Helene K. Sherman
Posted by Ellen at 1/28/2006 07:06:00 PM 6 comments:

My very dear and talented friend Myfanwy Collins has challenged me to write 10 interesting facts about myself. Yikes. I have to dig pretty deep beyond my everyday life of driving carpools and shopping at Target to come up with such a list, but here goes ...

1. I once had Chinese food in Marvin Hamlisch's apartment.

Long story short is that I met Marvin and his live-in girlfiend at the time--a very young Emma Samms--through a relative. Emma and I became fast friends and we sometimes got together at their apartment.

2. I was born with a hemangioma on my left ear and had it surgically removed when I was 5 years old.
Not sure that qualifies as interesting. Would it help to know my mother fainted when she saw me come out of surgery with my head wrapped in bandages?

3. I can faint from even thinking about medical procedures.
Indeed, I passed out the first time I put in contact lenses. Per number 2, I think this is a genetic condition.

4. I've had hypnosis therapy for my fear of needles.

It worked pretty well but, per number 3, don't tell me about your root canal in graphic detail, okay?

5. I have never once made love outdoors.
That one's kind of sad, isn't it?

6. During my third pregnancy, my heartrate went up to 240 beats per minute.
Scary. They never figured out the cause, and did all sorts of terrible tests on me, including things I feared would hurt the baby. I recovered, and the baby is now a healthy 8-year-old girl, albeit with allergies. Could the tests be the culprit in that? I'll probably never know.

7. When I was a teenager, my friends and I sneaked into a Broadway rehearsal for the Monty Python show, and wound up going out for beers with Terry Jones and Terry Gilliam.
My girlfriends and I had soft drinks, of course. I guess we were pretty gutsy kids (and devoted fans) to sneak in like that.

8. I once lived on Abbey Road in London.

Yeah, that Abbey Road. I was a college student and spent a year studying abroad.

10. I can get my legs into the lotus position without using my hands. 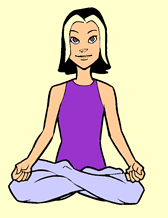 People seem to be impressed by this. Men, especially.


I know I'm supposed to just tag one person, but I have a couple of brilliant and fascinating blogger friends whose answers I'm just dying to see, so I'm going to cheat. Ready? Jordan Rosenfeld, Robin Slick, Melanie Lynne Hauser, and Susan Henderson ... you're IT!
Posted by Ellen at 1/25/2006 05:45:00 AM 14 comments:

Teen thriller fiction. Did you know such a thing existed? I didn't. If I had, I would have found (and bought) this incredible series from Laurie Stolarz when I was combing the bookstore shelves for Chanukah gifts for my kids.

But better late than never. I've decided I'm going to get these even though the holidays are past. My kids are readers, and I think the older two are going to devour these.

My thirteen-year-old--who usually reads only nonfiction--is deep into The Shining right now, and I've been eager to find more books to ride his current wave of interest in things magical and creepy.

My eleven-year-old loves nothing more than getting attached to a really good series, and I think this will capture him with its magic. Check out this review I found, written by a kid his own age:
Blue is for Nightmares

Great, huh? I think I'll be making a trip to Border's today.

For more information on Laurie Stolarz and these great teen books, check out her website: lauriestolarz.com
Posted by Ellen at 1/21/2006 11:38:00 AM 2 comments:

Hurrah! My galley pages have arrived! I'm so out-of-my-mind excited that I'm going to be a total doofus and show you pictures. Here they are: 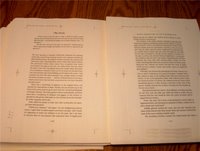 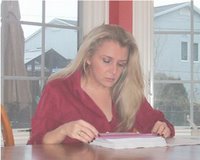 Don't I look so mellow in this picture? Totally staged, believe me. I was weeping like an idiot when I opened the package from my publisher and got my first glimpse of how my book is going to look.

Oh, and did I mention there's SEX?

My amazon rankings are about to drop into the millions, so I thought it was a good time to bring it up.
Secret Confessions of the Applewood PTA
Posted by Ellen at 1/15/2006 05:31:00 PM 2 comments: Friends, I’m excited! I’ve been asked to join a group of women writers who have started a cyber circuit to promote each other’s published books. I was introduced to the group by Melanie Lynne Hauser (author of Confessions of Super Mom), who my husband says is the Midwestern version of me, though I’m pretty sure her husband would say I’m the East Coast version of her. In any case, Melanie is smart and talented and funny as all hell, and I’m honored to be compared to her in any way.

But today I’m not here to talk to you about Melanie, but about Sheila Curran, the first author in the Girlfriends' Cyber Circuit I’m pimping for. And I’m stoked, because I’ve checked out Sheila’s website and her book, Diana Lively is Falling Down, looks so simultaneously hilarious and touching that I can’t wait to get my greedy little hands on it. (I’ve already ordered mine from Amazon. If you want to do the same, click here.) If I was just a little bit more narcissistic, I'd say she's the British version of me, but I'm not so I won't.

Anyway, if I could get reviews half as good as Sheila's I'd die happy. Read these and see what I mean:

Not yet convinced? Then take a tour of Sheila's cool website, which includes an excerpt:
SheilaCurran.com

It wishes with the whole until the healthful, lucky New Year and the allegro!

Makes not the sense to you that title?

There's this funny little site called Lost In Translation that translates phrases back and forth between English and five or more different languages. The results can be hilarious.


Translated back to English:
Wishing with each one by new healthy, happy and merry year!


Translated back to English:
Desire with everyone up to the new healthy, lucky and merry year!


Translated back to English:
It wants with all until the new healthy, fortunate year and allegro!


Translated back to English:
It wants with the everything until the healthful, fortunate new year and allegro!

Which celebrity do you resemble?

I look like Scarlett Johanssen and Brigitte Bardot? Ha!

Many thanks to my funny and talented friend, Robin Slick, for pointing me in the direction of this entertaining site: