Is There a Misogynist in the House?

I guess women just aren't writing books these days. Oh, wait. According to The Times' own best seller lists in the back of the issue, four out of the top ten hardcover books were written by women, as were six out of the top ten trade paperbacks. In mass market paperbacks, it was an even split.

Maybe I shouldn't be so hard on The New York Times for its editorial decisions. After all, women are fine for frothy books about silly things like the relationships between human beings, but aren't quite up to the task of serious literary thought. Only this leaves me wondering why four of the seven reviews are written by women. 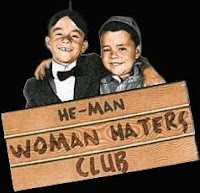 I can't quite bring myself to believe that a newspaper as educated and liberal as The New York Times is run by Spanky and Alfalfa. I'm left to assume that the editors are so traumatized by the erstwhile success of chick lit that they're trying to level the playing field with some kind of misguided anti-affirmative action tactic.

So How Come I Still Feel Fat?

About six months ago, I realized with a start that if I didn't lose a lot of weight, fast, I would have to attend my son's bar mitzvah wearing sweats or some matronly chiffon gown that looks like I stole it from a beefy transvestite.

It was the impetus I needed to get off my glued-to-the-computer-chair butt and launch a full assault. And I mean full, as in Army, Navy, Air Force. Marines. Indeed, this middle-aged body stores fat like weapons of mass destruction. I needed to send in the troops … and I needed them fully armed.

My theory is that for women, trying to be thin at middle age is to wage war against evolution. Think about it. Men are supposed to be physically attracted to women who have plenty of years for childbearing and rearing, which is why 20-year-olds can eat cheese fries for lunch and still wear size 27 jeans. So freaking unfair.

Thus, I carved out a regimen for myself that consisted of getting on the treadmill six days a week, and eating a diet of low fat, low cal, low portion and practically zero carbohydrates rabbit food. Knowing this wouldn't be quite enough, I sought pharmaceutical assistance in the form of this miracle over-the-counter diet aid called Alli, which keeps your body from absorbing a percentage of the fat you consume. What's great about this supplement is that it doesn’t enter your bloodstream and make you speedy. It works on a gastrointestinal level. The down side is that the accompanying literature cautioning you to wear dark pants and carry a change of underwear is pretty much accurate. 'Nuff said.

As it turned out, my insanity paid off, and by the date of the bar mitzvah I had reached my goal of losing 20 pounds. I really didn’t think it was possible, so I was thrilled. And I got to wear a pretty teal dress that was silk and not chiffon. (It had a sheer jacket I kept on for most of the party, but, as you can see on the left, I lost my inhibitions at some point between the motzi and the horah.)

The day after the party, I reintroduced carbs into my diet, and was pretty sure I put on a couple of pounds immediately. I say "pretty sure" because I was afraid to get on the scale. Yes, I'm that emotionally screwed up about my weight.

I kept exercising, but was a little lazier about it, skipping a day here and there. The thought of approaching the scale got more and more frightening. It was like the monster I kept stored in my basement.

Meanwhile, I've been busy planning for another big event--the launch of my new book, THE SMART ONE. (Now available for pre-order, just F.Y.I.) I do not want to be fat for this, and so I decided I'd get back on the scale and set another goal for myself. But I was terrified to find out how much weight I'd put back on so I spent a week increasing the intensity of my workouts to shore up my courage.

Today, with a lot of self-talk to steady my nerves, I finally got the nerve to approach the scale. I told myself that if I was up five pounds from the weight I was in April, it was no big deal. I could lose it. I would lose it. And more. No reason to send myself into a depression or an anxious tailspin over it. I could deal with this.

I had lost six pounds since the day of my son's bar mitzvah.

What? How could that be? And why do I feel so fat?

I guess it's possible I have some form of body dysmorphic disorder, especially if it runs in families. My mother eats about fourteen calories a day, weighs slightly less than a sparrow, and is so thin I fully expect her to disappear between the cushions of the sofa one day, never to be seen again. Yet she thinks she's fat.

My father has been on Weight Watchers for several years now, and can pontificate on managing food points for more hours than there are calories in his daily diet. And often does.

My Atkins-crazed brother will proudly tell you that he hasn't eaten a piece of bread in twelve years. (How's that working out for you, Stephen?)

My sister manages her weight through exercise and I'm pretty sure an apocalypse wouldn’t keep her from getting to the gym. ("Andrea, there's a tsunami on its way to Long Island! We have to evacuate!" "I'll catch up with you. I have an appointment with my trainer.")

QUESTIONS TO ASK BEFORE MARRYING

Today I get to blog about one of the most popular and beloved authors in the Girlfriends' Cyber Circuit, Melissa Senate. If you haven't read any her books yet, you really should. You'll see why Booklist called her "one of Red Dress Ink's brightest talents."

Her new book, QUESTIONS TO ASK BEFORE MARRYING, just came out and it looks fantastic. Here's the summary from her publisher

A very popular New York Times article lists fifteen questions couples should ask (or wish they had) before marrying. Ruby Miller and her fiancé, Tom Truby, have questions 1 to 14 almost covered. It's question 15 that has the Maine schoolteacher stumped: Is their relationship strong enough to withstand challenges?

Challenges like…Ruby's twin sister, Stella. The professional muse, flirt and face reader thinks Ruby is playing it safe. And that the future Mrs. Ruby Truby will die of boredom before her first anniversary or her thirtieth birthday, whichever comes first.

Challenges like…sexy maverick teacher Nick McDermott, Ruby's secret longtime crush, who confesses his feelings for her at her own engagement party.

But before Ruby can plan the wedding that may never be, Stella announces she's pregnant by a one-night stand whose name might be Jake (or James? Maybe Jason?) and who lives somewhere under the glittering lights of Las Vegas. Ruby and Stella hit the road to find him—with a lot more than fifteen questions.

And after three thousand miles, a stowaway relative and hitchhiking teen lovebirds bound for an Elvis wedding chapel, the Miller sisters might get some answers.

Lucky for me, Melissa agreed to play along with my GCC-Does-Hollywood fun, and here's how she'd pitch the book to our fictional producer:

Estranged twin sisters, Ruby and Stella, are on a long and bumpy cross-country road trip from Maine to Las Vegas, where Ruby, conservative school teacher with a secret crush on another man, may or may not marry her conservative school teacher fiance in an Elvis wedding chapel. Not if Stella, professional muse and face reader, has anything to say about it and she has a ton to say for three-thousand miles.

And here's how she would cast it:

Conservative Ruby who is torn between two men: my beloved Mary Louise Parker. She says quite a lot with that face by not saying anything. I’ve loved her since Fried Green Tomatoes.

Professional muse Stella, pregnant from a one night stand and searching for the father, whose name she isn’t sure of: Kristin Bell, the young actress from Veronica Mars would be the perfect Stella. She kicks butt, but has heart. 
To buy QUESTIONS TO ASK BEFORE MARRYING, visit your local chain or independent bookstore. To buy online, go to amazon.com, barnesandnoble.com or any cyber bookseller. For more information, visit Melissa's website at melissasenate.com.

Check out the HarperCollins page today and see who their TOP AUTHOR is:

Watch TruTV this Friday at 10 pm

The smart folks at TruTV (formerly CourtTV) have seen fit to give my buddy Mark Ebner, sizzling crime journalist and all-around professional provocateur, his very town television show. It's called Rich & Reckless, and it premieres this Friday at 10 pm. Set your DVR.