Me and my book jacket

Coincidence? Or did someone show the illustrator a picture of my hairdo? I've never met the artist or the designer, so I honestly don't know. But I suspect it's just happenstance. 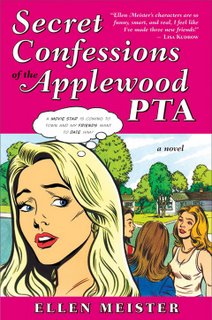 I've been toiling away at my second novel, THE SMART ONE, and today I hit the halfway mark. Hooray! I think I'll take myself out to lunch.

My friend and fellow writer, Ray Collins, has made it his personal mission to bring flash fiction to the people though a labor of love he calls Quiction Online. This week's edition features work by Donia Carey, David Coyote, G.C. Smith and Julie Balloo, as well as a story by yours truly called, "Stuck," which originally appeared in Hobart #4.
Posted by Ellen at 11/28/2005 08:29:00 AM No comments:

On Friday I ran away from home.

Alas, it wasn't exactly a dramatic escape. It was a pre-planned day and night so that I could catch up on my novel writing. Since my parents are in town and had volunteered to watch the kids, it was a rare opportunity to get away.

I had made reservations at an out-of-the-way hotel on the north fork of Long Island, facing Peconic Bay. I thought it would be romantic in a writerly sort of way to be all alone on a chill night, facing the deserted windswept beach as I wrote. Since I'm not a spur-of-the-moment kind of gal, I had reserved my room in advance, mapped out driving directions, and spoken at length with the front desk about assuring me an early check-in time.

But even the best laid plans gang aft agley. (See? I really am a writer!) When I got to the hotel, which was really a sharp right turn from the ass end of nowhere, the place was deserted. The office was dark and empty. The parking lot only had one car besides mine, and a thorough search of the grounds revealed that it belonged to a cleaning lady who didn't speak a word of English. She did, however, rummage through the office desk until she found the home phone number of the woman who was supposed to be at the front desk. I used my cell and tried to reach her, but to no avail. So I waited and waited, and finally gave up. Then I drove to a big, plush, fancy Hilton nearer my home.

So, despite losing a few hours writing time, perhaps it worked out for the best. Being alone in a luxurious room with my laptop and a live line to room service was really just what this writer needed. And now, instead of being behind schedule on my novel, I'm a little bit ahead.

I'm smiling today, as I have much to be thankful for. And also, you got to love a holiday that's all about food and family and more food, with all the poignancy and none of the pressure associated with religious celebrations. 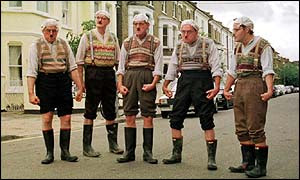 This weekend I had a reunion with my high school buddies, Linda, Marlene and Bette. We spent a good amount of time reminiscing about our exploits as Monty Python fanatics, plugging the gaps in each other's memories.

"Were you there the day we sneaked backstage during rehearsals of their Broadway show?"

"Her parents sent her to stay with an aunt in Pennsylvania that summer, remember?"

That particular memory was the highlight of our little group's fandom (and poor Linda missed it). We were suburban girls, and had bridge and tunneled our way into Manhattan during the rehearsals of the Pythons' Broadway show (can somebody please remind me what it was called?). We stood in front of the locked doors of the theater (Winter Garden?) trying to devise a way to sneak in, when we saw a delivery boy try the doors and then head for the side entrance. We followed him right in.

Ballsy little chicks that we were, we parked ourselves right behind Terry Jones and Terry Gillian, who were shouting directions to the folks on stage setting up the scenery. We struck up a conversation, and eventually they asked if we wanted to go across the street for a beer. We cleared our schedules and joined them. Of course, we were underage, so we had to have sodas instead of beers, but we felt terribly grownup.

Several years later, I wound up spending a college semester in London. Somehow, I got Terry Jones's home telephone number (how did I manage that?), and called him on some pretense that escapes me. I know that it resulted in an invitation to a pre-release private screening of "Life of Brian," and later to a dinner invitation at his home, where I joined him and his wife (Allison?) and a friend who, as I recall, was "an American writer chap" who had once interviewed John Lennon for Rolling Stone.

More interesting than all these memories--and a topic we didn't get around to discussing at our reunion brunch--was why we seized on the Monty Python troupe with such devotion. I know that teenagers latch onto celebrities--usually rock stars--with a kind of idolization you just don't see in adults. Not healthy adults, anyway. I have to believe that hormones play a role in this, as teenagers feel things with an almost pathological intensity. They don't like and dislike, they LOVE and HATE. So I understand that there's no line between a fan and being a rabid fanatic, especially if your friends share the passion. Then it just crescendoes.

But. Why Monty Python? Why not The Grateful Dead or The Doobie Brothers or the Eagles or Bruce Springsteen? What was it about this oddball British comedy show that inspired our worship? They were funny, sure, but there had to be more to it than that. Maybe it was because they weren't a rock group. Perhaps idolizing musicians seemed too normal, too much like something other kids did. We felt so fringe, the four of us. There was no place for us to fit in, except with each other. So maybe we were drawn to Terry, Terry, John, Michael, Graham and Eric because they created a world where you didn't have to fit in. They made oddness king. That was important to us back then. I hope it still is.
Posted by Ellen at 11/22/2005 07:06:00 AM 4 comments:

Don't buy me a present. Buy my book!

It's countdown time and I need your help, dear reader. My first real personal appearance as an author is almost upon me, and I'm fraught with anxiety. I'm not just doing a signing or a reading, but giving an actual speech, which is what has me in a tizzy. Any nonchemical-based tips on how to deal with stage fright are most welcome!
Posted by Ellen at 11/15/2005 06:27:00 PM 10 comments:

I've been dying to post this for WEEKS and just got the okay. So it's official. This is my cover. Do you love it? I do! 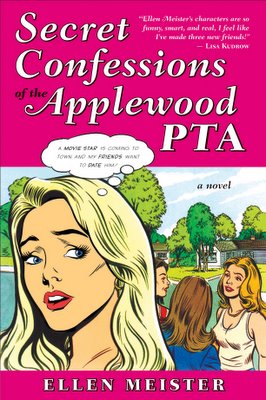 (Edited to add: my 13-year-old informs me that you only need to do that lower right corner click on Internet Explorer. "Firefox is way easier," says he. Live and learn.)

My second book deal has been announced in Publishers Marketplace, the trade journal where such things are listed:

Fiction:
General/Other
Ellen Meister's THE SMART ONE, in which three sisters trying to shake their childhood labels of "the smart one," "the pretty one" and "the wild one," discover that there's no place like home (even after finding a dead body in an industrial drum beneath the house next door), again to Carrie Feron at Morrow, for publication in 2007, by Andrea Cirillo and Annelise Robey at the Jane Rotrosen Agency. arobey@janerotrosen.com

I need to whine today

I'm cranky today, really feeling tired of the way so many writers let jealousy blacken their hearts. I belong to an online writers' group where most of the folks are truly supportive. But in the past week, three different writers have made it their business to lash out at me. The latest came in the form of a review of some chapters I posted. It was so unnecessarily mean that it just broke my heart. I wasn't insulted by her comments about the chapters, as her points were foolish and lame, and really made little sense. Indeed, her criticisms were so obnoxious and pervasive, it was clear she was hell bent on wounding me. But why? I've never had any dealings with this woman. I can only surmise that it's my success that has her so angry.

And then today I read an entry in Tess Gerritsen's blog, where she complains about critics putting her down for being "too commercial." Essentially, they're angry that she's successful. (I just read her latest, Vanish, and can't imagine that anyone who enjoys thrillers could seriously complain about her writing, which is pitch perfect.)

So bleh. All this pettiness has me in a bad mood.

On January 1st, the utterly delicious and sadly missed flash fiction ezine, insolent rudder, will relaunch with a glorious new issue. I'm proud to announce that it will include a interview with yours truly. For a sneak peak, click here.
Posted by Ellen at 11/03/2005 03:02:00 PM 7 comments: