Less than 5 weeks until the official release date of my first book. Do I feel ready? No I do not! (Kind of reminds me of the day I went into labor with my first child. In fact, I think I'm getting cramps at regular intervals.)

Anyway, ready or not, I've got some local stuff lined up. Here's an early peek at where I'll be appearing:

What? You haven't read Bonnie Glover? Click over to my website immediately, where I feature one of her fine pieces on my Storyboard page. And then go buy her kickass book, The Middle Sister. You'll thank me! Bonnie is a wonder.
Posted by Ellen at 6/24/2006 10:05:00 AM 4 comments:

I always enjoying blogging for my fellow Girlfriends Cyber Circuit authors, but it's especially fun when I get to introduce you to a debut author. Sara Rosset's first book is a "mom lit mystery," and it sounds like a treasure. Here's the summary:

Air Force wife Ellie Avery is an ace at moving. A professional organizer, she plans ahead, packs efficiently, and even color-codes the boxes. But nothing in her bag of tricks could prepare her for the secrets that shadow her new neighborhood…secrets that drive one of her neighbors to murder.

Moving four times in five years has honed Ellie’s considerable skills. But moving with a newborn daughter and husband Mitch in tow, a record-breaking heat wave, and the realization that their dream neighborhood is known as Base Housing East is enough to make her turn to chocolate for comfort. Now half of their neighbors are with the 52nd Air Refueling Squadron. Forget privacy.

Forget peace of mind, too. Driving home from her first squadron barbecue, Ellie finds neighborhood environmental activist Cass Vincent dead on the side of the road. The police call it an accident—Cass, fatally allergic, was stung by wasps—but Ellie’s not so sure. And when it looks like Mitch’s best friend might be a suspect in the murder, Ellie starts snooping in earnest. What she finds shocks her—and when suspicious “accidents” start happening in her own backyard, Ellie realizes she’s getting closer to the killer…maybe too close!

Doesn't that sound like a great read? Here's what critics are saying:

"Mayhem, murder, and the military! Sara Rosett's debut crackles with intrigue. Set in a very realistic community of military spouses, Moving is Murder, keeps you turning pages through intricate plot twists and turns. Rosett is an author to watch." --Alesia Holliday

"A cozy debut that'll help you get organized and provide entertainment in your newfound spare time." --Kirkus Reviews

"Readers will salute Sara Rosett's fine mystery that sheds light on military life with the hopes that more such tales starring Ellie and her neighbors come soon." --Harriet Klausner, FAMM

To buy "Moving is Murder," visit your local chain or independent bookstore, or purchase online. For more information, visit Sara's website, sararosett.com.
Posted by Ellen at 6/23/2006 06:18:00 AM No comments: 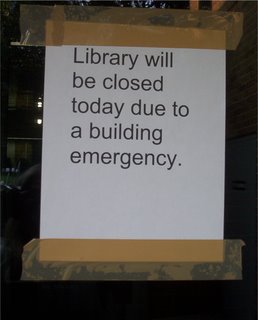 Bummer. I was planning on doing some work there today, but as I arrived the custodian was putting up that sign. I asked what the building emergency was, and he explained that they had found a snake in the nonfiction section. I was stunned. I had no idea Ann Coulter even did public library appearances.
Posted by Ellen at 6/18/2006 07:18:00 PM 9 comments:

Last night, CBS unveiled its new reality show, Tuesday Night Book Club. The concept is that the camera follows around a bunch of gorgeous, wealthy women to see what happens to them between their Tuesday night book club meetings. I think it's supposed to be a cross between Desperate Housewives, The Real Housewives of Orange County and ... er... Charlie Rose. Since they never got around to discussing or, for that matter, reading the book, it failed most of all in its literary aspirations. But I think we're supposed to like that. The idea, I believe, is for us to feel superior because we actually read, whereas they merely have lots of money, cool cars, hotel-sized homes, hot bodies and spectacular clothes.

Anyway, the book they were supposed to read was Jennifer Weiner's Good in Bed, which was a good choice for them. Too bad they didn't read it, because I think they might have liked it. It's got a lot of humor, an engaging plot, a good dose of pathos, and is fun read all around. If I was picking the book list for these gals, that one would have been on it.

Which brings me to the point of this post. I think all 8 episodes for this season are already in the can, but if this show gets renewed, I'd like to offer the producers my own list of books these gals can read. Even though these women seem more interested in discussing their sex lives than literature, it's an earnest list; I really think they'd like these books if they actually committed themselves to reading. Here goes:

1. The True and Outstanding Adventures of the Hunt Sisters by Elisabeth Robinson
This book has everything--a sister story, Hollywood glitz, relationship angst, outstanding writing and enough humor and pathos to make you seem like a lunatic to anyone watching you read. God, did I laugh and cry from this one! I think I scared the children.

2. Lily White by Susan Isaacs
An oldie but a goodie. Everyone should read this Susan Isaacs classic, which Publishers Weekly describes as "Marjorie Morningstar meets Nancy Drew."

3. Good Grief by Lolly Winston
Being widowed at a young age isn't funny, but this tender, hilarious book manages to pull it off like magic. It's just one of those books you devour because every page is a delight. (See? I told you this was an earnest list!)

4. The Inn at Lake Devine by Elinor Lipman
This book is so smart and so funny and so perceptive, I challenge anyone to read it and not become an immediate Elinor Lipman fanatic.

5. A Widow for One Year by John Irving
I had to put at least one book by a male author on this list, and thought hard about which one to include. It was between this and She's Come Undone by Wally Lamb, another lush, gorgeous novel. I know I have a bias here, as nearly character in this book is a writer, but it deals with such intense emotional issues that I just have to believe it would strike a chord with these women. Another book that's got everything--murder, intrigue, marriage, infidelity, death, love, sex, belly laughs, etc. etc.

6. The Girls' Guide to Hunting and Fishing by Melissa Bank
Is is possible not to love Melissa Bank's brilliant, funny and honest voice? This book slayed me. Like Elinor Lipman, she's a great example of a smart writer who can deliver lit fic with commercial appeal.

7. Angels by Marian Keyes
This is the only one I'm recommending that could qualify as genuine chick lit, but damn is it good! Great plot, well-developed characters and deep, hearty, well-earned laughs.

8. Secret Confessions of the Applewood PTA by Ellen Meister
Ha! You didn't really think I'd leave off my own book out of some misguided sense of modesty, did you? Besides, I really do think they might like it. So c'mon, CBS. What do you say?
Posted by Ellen at 6/14/2006 01:57:00 PM 6 comments:

Keith Lafleur thinks he's cut the deal of a lifetime. The huge old, two-story house is his for the taking as long as he can move it to a new location. It's too big to move as is, but Lafleur's solution is simple: cut it in half. He has no idea, though, that by splitting the house he'll be dividing a family, a family long dead, a family that still exists in the house . . .

Angelica Batiste is a young, mentally challenged woman with a unique gift. Her mind, no more advanced than a ten-year-old child's, sees things before they happen. Not only does she see them, she draws them with extraordinary perfection.

When Angelica moves into part of an old, two-story house with her cousin and a friend, her gift suddenly turns into a terrifying power she can not control. The house feeds it. The house needs it. And only death can make it stop.

Want even more of a taste? Click here to sample Deborah's chilling trailer.

Here's what the critics are saying:

"LeBlanc's prose is a flying leap into the labyrinth of madness. Her images are unforgettable." --CelebrityCafe.com

A House Divided can be purchased online, or at your local chain or independent bookstore. For more information, visit Deborah's website at deborahleblanc.com.
Posted by Ellen at 6/13/2006 01:41:00 PM 1 comment:

Friends, Movable Type almost gave me a nervous breakdown, so here I am back at Blogger. I'm staying here for the foreseeable future, I promise!
Posted by Ellen at 6/12/2006 02:55:00 PM No comments:

After months of working with the wonderful Michael Borum of Etherweave, my website is live online. The door is always open, so stop in any time for a cup of coffee ... or just to have a look around:
ellenmeister.com
Posted by Ellen at 6/05/2006 05:59:00 AM 6 comments:

I just googled my book title (shut up) and was happy to discover that my audio publisher, Brilliance, has a sample on their site. This was the first time I got to hear any of it, and I can tell even from this small clip that Lisa Kudrow does an amazing job. I'm so grateful! Here's a link:
Listen to Lisa Kudrow reading from Secret Confessions of the Applewood PTA.
Posted by Ellen at 6/03/2006 06:49:00 AM 11 comments: