Junk in the trunk?

I'm the featured blogger over at the Girlfriends Book Club Blog today, talking about my, uh, physical shortcomings ... and more. I hope you'll check it out" 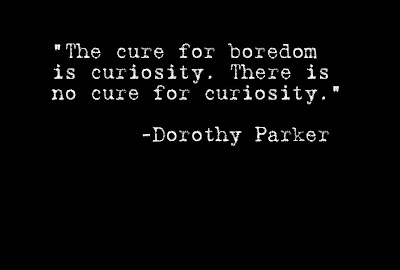 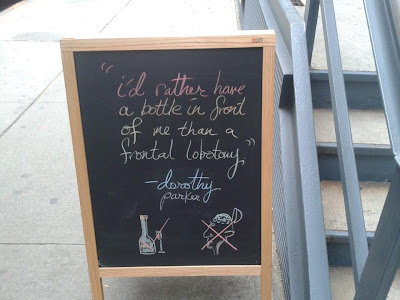 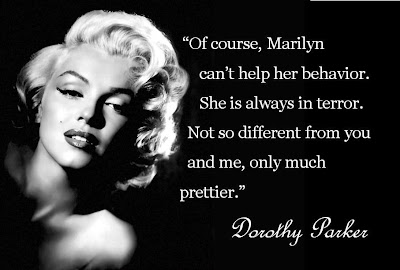 Some recent highlights from my Dorothy Parker Facebook page: 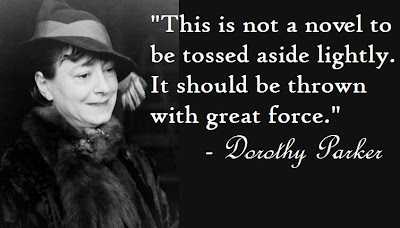 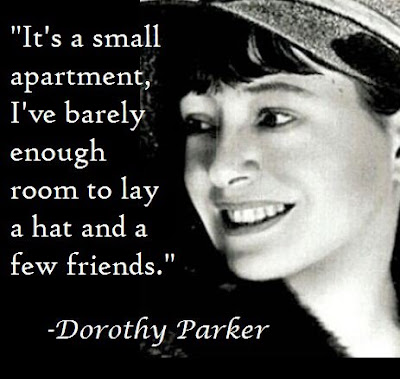 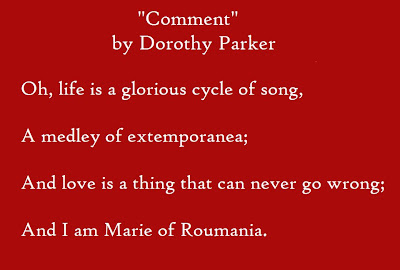 A Nod From The Paris Review

If you didn't see it, here's what you missed:

Q: Don't you think it's kind of weird for a dead writer to have a Facebook page?
A: Not really. There are lots of dead authors haunting Zuckerberg Manor.

Q: Why do you repeat quotes so often? It pisses me off.
A: Yeah, I get a lot of that. But it's a little difficult to get new quotes from a writer who's been dead for decades. I'm careful, though, not to repeat anything more than once a month.

Q: On the other hand, I don't think I'm getting all your status updates in my news feed. Is that something you're doing on purpose?
A: No. It's some kind of fascist algorithm recently introduced by Facebook to try to squeeze ad dollars out of long-suffering page administrators.

Q: How do you know Dorothy Parker actually said the things you attribute to her?
A: I've been researching her extensively for years for a book I'm writing.

Q: What if I think you mistakenly attributed someone else's quote to Dorothy Parker?
A: You're probably wrong, so check your sources. But if you can prove I made a mistake, by all means call me out on it. I'll hold out my hand for a sharp slap.

Q: What if I can't prove it but really enjoying feeling like I'm smarter than you?
A: I hear that Oscar Wilde is looking for new followers.

___
Speaking of the Paris Review, here's a link to the interview they did with Dorothy Parker in 1956. Still one of the best writer interviews ever.

Farewell, Dorothy Parker is moving right along. I got the book jacket design the other day and it's a knockout. Can't wait to share it with you! Hope to have the official pub date very soon.
Posted by Ellen at 7/11/2012 05:51:00 AM No comments:

The Wishing Cake is a romantic comedy about a divorcee who isn't expecting sweetness to walk into her life. But when an enchanting elderly couple enters the bakery where she works and gives her some blue powder they calling "wishing dust," everything changes. And I mean everything. Does that sound like a good premise for a movie? Here's an excerpt that explains more:


She held up her hand to catch a ray of light beaming through her blinds from the street lamp. She realized, then, that she had fallen into bed without even washing up, as there was still a bit of the old couple's sweet blue dust on her finger.


Rhea rolled onto her side to try to fall asleep. As drowsiness descended, thick and inevitable, she couldn't rid herself of the single bitter reflection that did nothing to help her situation: I wish I were a man.


Then, as consciousness dissolved, her stomach rumbled in hunger and she instinctively sought the sugary residue that hadn't made its way to the cake.


At last Rhea drifted into deep sleep, her blue-tipped finger falling slowly from her lips as she repeated her wish.
========

In honor of America's birthday, I'd like to share this story my father wrote about our family's journey to the land of freedom ...

In the Beginning There Was a Shortage of Herring
by Gerard Meister
There were no vintage years for Jews in Russia, but for Papa 1907 loomed ominously. Born in 1889, he was entering his eighteenth year and soon the Czar's military police would be knocking on the front door of the Maistrowavoy home in Kiev with a draft notice for that life-numbing, ten year conscription term in the Imperial Army plus fifteen years in the reserves. His older brother, Mischa, had been dragged away by such conscription gang in 1905 for the Russo-Japanese War and, although reportedly released from a Japanese prisoner of war camp, was still missing.
Papa did not know which way to turn or where to run until he got a letter from Tanta Rochel, his mother's sister in Philadelphia, promising him a steamship ticket to America if he ever made it out of Russia. The fearlessness of youth crystallized his thinking in a heartbeat. Though it was already late March, the tenacious Russian winter had not yet loosened its grip on the land. But Papa knew that if he were to have any chance of foiling the Czar's plans for him, he would have to escape before spring whispered its presence to the hibernating Cossacks, awakening the resumption of their scythe like patrols.
His decision to leave was easy compared to what came next. Papa's farewell to his family was the stuff poets dream of capturing but seldom do. His mother, Rachel, wept as she wrung her hands all the while nodding her head in recognition of the certainty that she would never again see her youngest boy. His father, Shepsyl, and grandfather, Yankel (my namesake) stood by awkwardly, in stoic silence. Men, even Jewish men, had not yet learned how to cry.
By early afternoon, the sky darkened. Night came early in the Ukraine and Papa edged toward the door. The kerosene lanterns were dimmed to mask his silhouette into the shadows, while five brothers and sisters checked and rechecked the muffled, knapsacked figure. He was ready to go. The finality of the moment fell across the room like a heavy blanket, choking the goodbyes to hoarse whispers. All eyes were on the floor when Papa released the door latch and, without looking back, slipped into the night. An odyssey of six thousand miles and destined to last a life spanning sixty-six more years, began with its first furtive step.
Often under cover of darkness and traveling mostly by back roads, Papa was guided by the thread of kinship and tradition connecting the shtetls with one another and without which he would have been alone in the oblivion that was gentile Russia. With stealth and determination he managed to elude all the patrols until he was deep in the Pale of Settlement, where there were many more Jews and fewer police. Papa's best guess was that somewhere around Korosten he was able to chance a train now and then, along with hitching an occasional ride with a Jewish wagon master.
Some forty years later, I asked him how he managed to survive. What did he eat? Where had he slept during those cold spring nights? Papa explained that the network of shtetls resembled the Underground Railroad of America's slave-holding days. Though Jews were not slaves in Russia, neither were they really free. He never recalled spending a kopek on food or lodging in a Jewish settlement. The thirty or so rubles sewn into his underwear went for cabbage soup and bread when he was in the big cities and for the train fare to reach them.
By early August, some five months after he slipped into the night in Kiev, he stood in an immigrant shelter office in Hamburg, Germany. The next series of events came in a rush: his Tanta was notified, the money cabled, passage out of Hamburg was booked and before the month ran out Papa set sail for America.

Hello friends. Thanks for clicking in. I'm posting the opening to my new novelette, The Wishing Cake, as I hope it will entice to you to download the rest of it. I'm really proud of this story, and am thrilled that it's getting such a great response from readers. (All 5-star reviews so far!) Here's chapter one ...

The first thing Rhea noticed about the old couple was their posture. They stood erect, straight-backed, as if they had gone to sleep as young people and woken up old. The years simply hadn't worn down their bones.
But the truly strange thing, Rhea realized, was that they had managed to enter the bakery silently. She glanced at the door, which was rigged with a bell to let staff know every time it was opened. Either it was broken or arranging butter cookies was taking up way too much of her cerebral cortex.


To read the rest, please click here now  and you can download it immediately. It's available on Kindle for any device for just 99 cents. This is a special introductory  price.
If you don't have a Kindle, click here to download a free Kindle app for your computer or smart phone.
Posted by Ellen at 7/02/2012 12:40:00 PM 2 comments: