To be filed under Better Late than Never, my blog post about ACCORDING TO JANE, a bright and inventive debut from Girlfriends Cyber Circuit author Marilyn Brant. For a Jane Austen fan like me, this sounds like a delicious read. Here's the press release summary:

day in sophomore English class, just as Ellie Barnett's teacher is assigning Jane Austen's Pride and Prejudice. From nowhere comes a quiet "tsk" of displeasure. The target: Sam Blaine, the cute bad boy who's teasing Ellie mercilessly, just as he has since kindergarten. Entirely unbidden, as Jane might say, the author's ghost has taken up residence in Ellie's mind, and seems determined to stay there.

Jane's wise and witty advice guides Ellie through the hell of adolescence and beyond, serving as the voice she trusts, usually far more than her own. Years and boyfriends come and go--sometimes a little too quickly, sometimes not nearly fast enough. But Jane's counsel is constant, and on the subject of Sam, quite insistent. Stay away, Jane demands. He is your Mr. Wickham.

Still, everyone has something to learn about love--perhaps even Jane herself. And lately, the voice in Ellie's head is being drowned out by another, urging her to look beyond everything she thought she knew and seek out her very own, very unexpected, happy ending. . .

Marilyn was good enough to answer some interview questions for me, so here goes ... 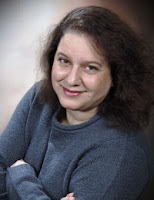 Tell us about ACCORDING TO JANE and the inspiration behind it.
My debut novel, According to Jane, is the story of a modern woman who--for almost two decades--has the ghost of Jane Austen in her head giving her dating advice. I first read Pride & Prejudice as a high-school freshman. Like my heroine Ellie, I raced through the novel way ahead of the reading assignments. I loved both the story and Austen’s writing style immediately. Her books changed the way I perceived the behavior of everyone around me, and I spent the rest of freshman year trying to figure out which Austen character each of my friends and family members most resembled! Also like Ellie, I had a few (okay, a lot) of less-than-wonderful boyfriends, and I would have loved to have been given romantic advice from the author I most respected and the one who’d written one of my all-time favorite love stories.

Which scene in ACCORDING TO JANE did you love writing?
One scene I had a lot of fun with was the bar scene in the first chapter where my main character runs into her ex-high-school boyfriend for the first time in four years. It was a situation I had never experienced personally, but I could imagine the comical possibilities so clearly and feel and the frustration of my heroine as if I’d been the one standing there, facing the jerk and his latest girlfriend, while Jane Austen ranted about how “insufferable” he was.

Do you have a sample chapter posted?
Yes! On my website I have a segment of Chapter One available for anyone interested in reading. Also, if you go to the Amazon page for According to Jane “Search Inside This Book” feature, and people can read samples from scenes throughout the novel.

Any great fan/fan mail stories you care to share?
The book was just released on September 29th, so first impressions are still coming in, but I’ve gotten some truly wonderful emails from people who read the ARCs this summer. One of my favorites is from a woman who won a copy of the book in a contest and emailed me to say that she’d finished the book in a day and was on an emotional high from reading it. She added, “Sometimes I go through phase where I'm so blase about reading fiction and focus mainly on non-fiction (my usual staple), but once in a blue moon, a book grips me and makes me fall in love with fiction again. Thank you. A very grateful reader.” I will always, always love that message!

Do read books on the craft of writing, and do you have any favorites to recommend?
I’m a BIG fan of craft books, so I have more than one! I used Blake Snyder’s SAVE THE CAT! almost religiously in the plotting of my past several books. I’m still very sad that he’s no longer with us. As far as a great reference guide, Robert McKee’s STORY is incredible. It has more information about writing craft than I can ever internalize. Also, whenever I need a more emotional pick-me-up, I grab the Ralph Keyes book THE COURAGE TO WRITE. I recommend it to everyone.

What’s next for you, Marilyn?
I get to visit a number of book clubs that chose my debut novel, According to Jane, as their monthly book pick--wildly fun!--while also starting the production/promotion process all over again for my next women’s fiction project. That second book is done, but we’re still working on finding the right title. It’s a modern fairytale about three suburban moms who shake up their marriages and their lives when one woman asks her friends a somewhat shocking question… That comes out in October 2010.


Thanks so much, Marilyn!

To purchase ACCORDING TO JANE, visit your local chain or independent bookstore. To buy online, visit amazon.com, barnesandnoble.com, borders.com or any cyber bookseller. For more information, visit Marilyn's website at marilynbrant.com.

Ellen, thanks so much for hosting me :). Hope you have a wonderful weekend!