My Dinner with Doctorow

I've made a show of my crush on George Clooney, but the truth is that I haven't gotten truly weak in the knees over a movie star since I was a tender young thing and Paul Newman walked by me on West 57th Street close enough to touch. So I guess you could say I'm not particularly starstruck.

Unless, of course, you're talking about authors. These are my matinée idols, my rock stars, my heroes, and always have been. In fact, even when I young enough to get all stupid over Paul Newman, I was even more enthralled by an author I had just started reading, Richard Yates. Talk about weak in the knees. Yates's prose made me swoon.

I worked for his literary agent back then, and was fortunate enough to speak with Yates on the phone a number of times, and even got an autographed copy of LIARS IN LOVE. As you can imagine, it is my most prized possession. 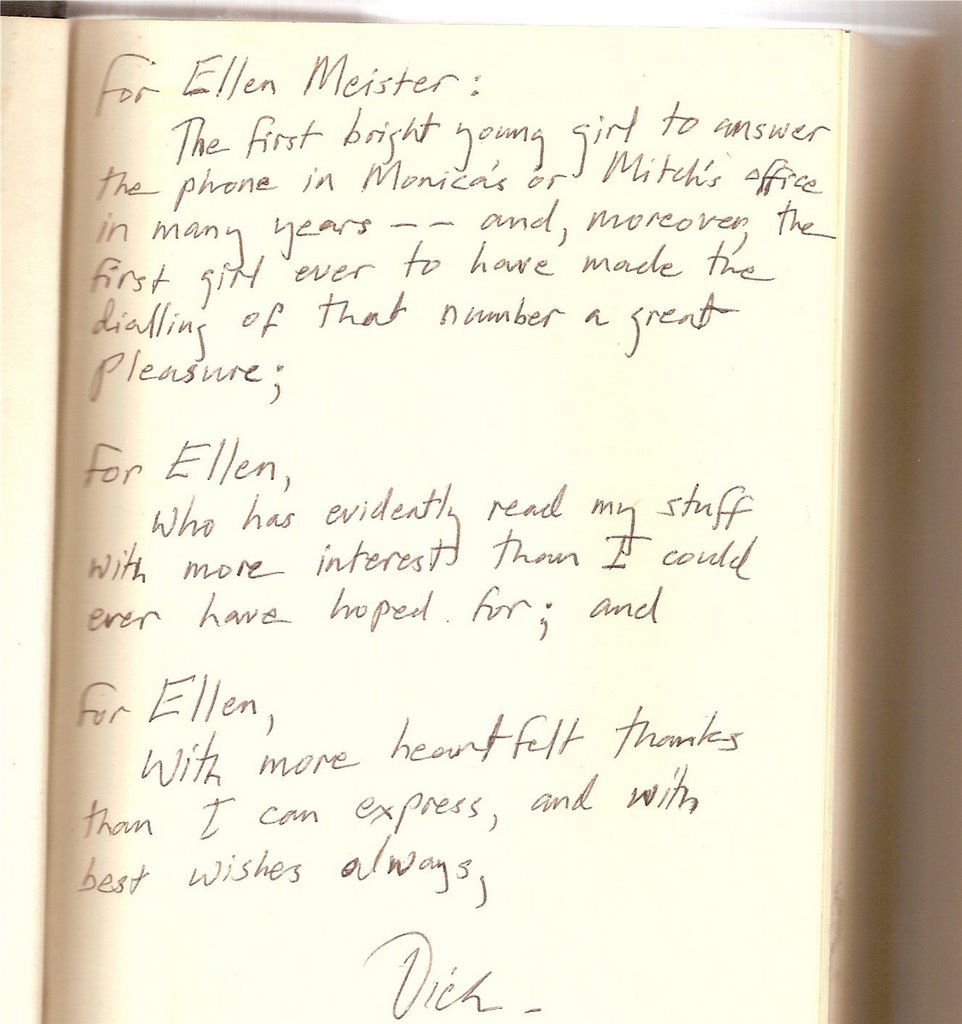 In the years since, I've been blessed with the opportunity meet and even befriend some of my favorite authors. Happy to say I still haven't become jaded. Indeed, the more distinguished a writer is, the more breathless I am about the idea of face time.

So you can imagine how excited I was to get the following email from my cousin Richard a few months ago:


Work for me? Dinner with E.L. Doctorow? I almost fell off my chair.

So of course I eagerly accepted. But I worried about the encounter. Would I babble in nervousness, as I often do? Would I embarrass myself and my dear cousin?

Last night was the dinner, and I'm happy to say it was a  wonderfully charming evening. Doctorow's wife, Helen, was so gracious she put me right at ease. We talked a bit about politics, a bit about writing, and a bit about WQXR. Toward the end of the evening, Edgar Doctorow asked me if I would like to do a reading at NYU, and Helen said that I'm a lively kid. I took it as a warm compliment!

So I guess I managed to get through it without making a fool of myself, even when Edgar made a passing reference to a late friend of his who had suggested the best way to present his work on stage. The friend's name? Paul Newman.

Ellen, I relate completely. While not in the same hemisphere with Doctorow, I recently went to a book signing by one of my favorite popular novelists, Diana Gabaldon. I drove six hours for this. I would not drive six hours to see Brad Pitt, but put an author on the table, and I am there.
During the lecture, when question time came, I was literally sweating. I had so many questions, but I didn't want to sound like a complete moron, so I decided to bide my time until just the right moment. I finally raised my hand, halfway hoping she would not even see me. Of course, I was immediately selected. Then, just like in a nightmare, I went completely mute for several seconds. It was an absolutely humiliating experience.
She was very gracious, and gave me the time I needed to overcome my idiocy, but still.
I cannot even imagine how you must have felt on the drive over to your dinner party. It sounds like you were quite a hit, however, since you were invited to speak at NYU. That is just fantastic! What a wonderful evening. I will think about it all day, and burn with jealousy. :)

OMG, OMG, OMG!!!!! I would have totally embarrassed myself and my family. Glad you kept your composure. :)

Janet, I so glad you got to meet Diana Gabaldon and that she was gentle with you! I'm sure those few tongue-tied seconds felt much longer to you than they did to anyone else. But meanwhile, what an intrepid traveler ... and devoted reader! (FYI, it's usually hard to get people from around the corner to attend a book event!) Thanks for sharing.

Brenda, I'm sure you would have been incredibly charming! You always are. xo

What a thrilling evening, Ellen! I await an invitation from Robin McKinley, but alas, none are forthcoming!

Glad you had a great time with the Doctorows. :)

Wow, Ellen, can I ever relate!

Recently, I won, via an on-line charity auction, a lunch and Seattle stroll-around, with Jamie Ford, author of "Hotel on the Corner of Bitter and Sweet," his best-selling (and debut) novel.

My husband and I will drive up to Seattle to meet him next week. Like you hoped with Doctorow, I sure hope I don't make a fool of myself.

Any advice you'd care to offer?